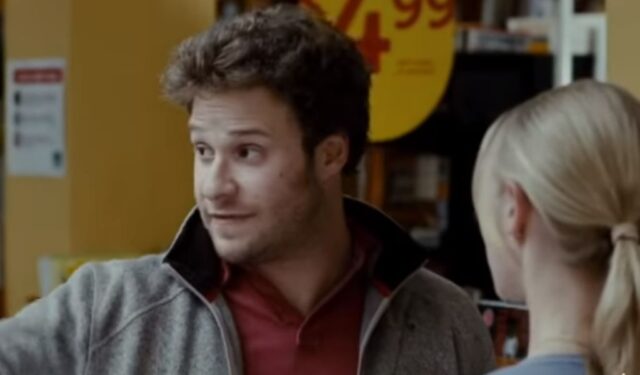 People often forget that Seth Rogen’s first movie was the cult classic Donnie Darko, which starred Jake Gyllenhaal. Not surprising, since he only had a small part, but again, it really makes him stand out. He didn’t find his place in the business until a few years later. He wrote and starred in some of the best comedies of our time, and he also directed some of them.

Even though the actor (and style icon) spends a lot of time behind the scenes now, making movies like “The Boys,” he still makes great movies. Here are some of our favorite roles he has played.

These Are the 10 Best Seth Rogen Movies

The best Seth Rogen movie, according to critics, in which he plays a character based on himself. The story was based on the things that happened to screenwriter Will Reiser when he was diagnosed with a rare type of cancer. His character is played by Joseph Gordon-Levitt in one of his best performances. He is the main character in a story that, despite being dramatic, is a warm comedy about friendship. This is a theme that keeps coming back to Rogen.

Seth Rogen was chosen by Steven Spielberg to play a major character from his past. The Fablemans is sort of the director’s autobiography. It tells the story of how his parents met and how he got interested in movies, and how these things shaped him as an artist.

Rogen is in the movie, and Paul Dano and Michelle Williams play Spielberg’s parents in a made-up story.

The experiences of young actor Greg Sestero after meeting an eccentric man named Tommy Wiseau, who was responsible for creating what is now considered to be the “best worst movie ever.” of history, are recounted in the film The Disaster Artist, despite the fact that the tale sounds like a story that is too crazy to be true. ” of history.”

James Franco takes on the role of Tommy, while Rogen’s character, Sandy Schklair, is a script supervisor who winds up becoming the first assistant director and even directs a few scenes himself. Dave Franco, James Franco’s brother, portrays Greg Sestero.

This gritty romantic comedy is also considered to be one of the best films directed by Judd Apatow. It stars Seth Rogen as a party-loving man who, after a night of passion with the serious Alison (Katherine Heigl), finds out that he is going to be a father-to-be since she is pregnant.

The play reaches dramatic points by tackling the topic of unintended pregnancy more seriously, and the weird pair ends up not being as mismatched as it seems they would be. Despite the play having a straightforward theme, the play is quite dramatic.

Unquestionably one of the most iconic comedies of the 20th century. Michael Cera and Jonah Hill star in the film as two close high school friends who want to get booze for one final party before graduation and manage to get a night out with some females. In the film, they also try to get a girl to go out with them.

Again, the premise sounds like it doesn’t have much going on, but Judd Apatow manages to craft a story with distinct characters and intricate connections, and what at first appears to be a stupid comedy ends up being an unforgettable coming-of-age story. Another one of Seth Rogen’s most iconic roles finds him paired with Bill Hader in the uniform of a law enforcement official.

Although Freaks and Geeks were important in Seth Rogen’s entry into the Hollywood industry, the film “40 Virgin,” in which Steve Carrell starred as the main character, was the film that launched Rogen’s career.

Another popular sitcom from the 2000s, this one follows a man who has never had sexual intimacy but, after making some new friends, decides to give it a shot. On the other hand, it does not appear that he is overly enthusiastic about it, particularly when he observes how difficult it is for other people.

This is the End, a 2013 comedy about the end of the world, was written, directed, and produced by Seth Rogen and Evan Goldberg. It stars some of Hollywood’s funniest actors, such as Rogen, James Franco, Jonah Hill, and Danny McBride. The movie is about fictionalized versions of the cast after the end of the world according to the Bible. It follows the group as they take shelter in Franco’s mansion until the end of the world. During filming, director Evan Goldberg made a fun game where the goal was to get as many cast members to say “No, I can’t do that” and then refuse to do something. He was only able to break Rogen and Franco. This is the End was a hit with both audiences and critics. The movie was full of self-deprecating humor that poked fun at the real-life characters and great, raunchy one-liners.

The coming-of-age teen buddy comedy Superbad, which came out in 2007, was written by Rogen and Goldberg when they were only 13 years old. It was loosely based on their own high school years in Vancouver in the late 1990s, and the main characters, Seth and Evan, were named after them. The movie is about two high school students who are too dependent on each other. When their plans to throw a big party goes wrong, they are forced to deal with their fear of being alone. Rogen and Bill Hader play Michaels and Slater, two incompetent police officers who are amused by the high schoolers’ attempts to get alcohol and even offer to help.

The movie Superbad was a big hit with audiences, and critics praised both the writing and the funny adventure of the two best friends. NPR said, “What makes the film so interesting is the disconnect between what these hormone-crazed kids say and what’s going on in their heads, where they’re desperately trying to hold on to the innocence they’re leaving behind.” Most people agree that Superbad is one of the best movies about high school ever made.

Seth Rogen and Evan Goldberg wrote and produced the classic stoner comedy Pineapple Express in 2008. The story is about a process server and his marijuana dealer who have to run away from a hitman and a corrupt police officer after seeing a murder. The two people who worked together came up with the story with the help of Judd Apatow. According to the director, they were inspired by Floyd, a stoner played by Brad Pitt in the movie True Romance. Apatow “thought it would be funny to make a movie in which you follow that character out of his apartment and watch as bad guys chase him.” James Franco co-stars as the friendly and easygoing drug dealer Saul, who thinks of Dale (Rogen) as his friend even though Dale doesn’t care about him. Pineapple Express is Seth Rogen at his most stoned, and the comedy between him and James Franco makes the movie a real laugh-out-loud riot for the audience.

In Jonathan Levine’s 2019 romantic comedy Long Shot, journalist Fred Flarsky meets up with his childhood crush and former babysitter Charlotte Field, who is now Secretary of State and getting ready to run for president. Field asks Flarsky to help her write her speech, and the two of them end up falling in love with each other. The director wanted to make a movie that was like the popular romantic comedies of the 1980s, like When Harry Met Sally and Tootsie, which starred Seth Rogen and Charlize Theron. Rogen was excited to take on the project and wanted to work with Theron in particular. The comedian joked that it took him “seven years to become famous enough to work with her.” The odd couple chemistry between them shines on screen, and the actor is just as charming and entertaining in the romantic comedy role.