MetaZoo is a new trading card game that a lot of people are interested in (TCG). He did get it right. MetaZoo cards have become more popular and worth more over the years since then. Mike Waddell spent most of his free time in 2020 putting trading cards with Bigfoot, Mothman, and other strange creatures into promo packs and sending them to potential collectors, investors, and gaming companies.

MetaZoo began in August 2020 with a Kickstarter campaign that raised $18,249. “Cryptid Nation” will be the first official set, and it will come out in July 2021. As of January of this year, MetaZoo’s last Kickstarter campaign raised more than $1.8 million, and you can buy MetaZoo cards at big stores like Walmart.

Some investors and collectors have said that MetaZoo is like the first-edition holograms of Pokémon Charizard or unopened booster packs of Magic: The Gathering. Sample MetaZoo cards, which were only made in small numbers and are now rare, can sell for thousands of dollars on the secondary market. Some rare cards, like the Red Ink First Secret Rare Box Topper, which is for sale on eBay for $20,000, bring up even more. MetaZoo has also attracted well-known people in the collectibles business, like Steve Aoki.

MetaZoo is a Kickstarter/TCG with a Cryptid theme. The monsters, spells, and artifacts in Cryptid Nation are the basis for a trading card game. The first set, which was funded through Kickstarter, is based on U.S. cryptids like Bigfoot, Mothman, and the Jersey Devil. This probably means that the designers want to keep their design options open for whatever comes next.

It’s a trading card game (TCG) like Pokemon and Magic: The Gathering. The game “MetaZoo: Cryptid Nation” is about breaking the fourth wall, which is called “meta.” This means that the environment you play in affects how strong the monsters and spells are. For example, if it’s raining when you play, water creatures and spells will be stronger. When you play by a fire in the dead of winter, your flame spells become twice as strong.

On the other hand, your opponent’s snow beasts may get stronger and may even be able to avoid direct hits. Because of this, the environment is a big part of the game. So, you can make your deck fit your safe environment, which will make your beasties stronger.

How do You Play MetaZoo Card Game?

You are a caster in MetaZoo. You use your spellbook to control magic and animals. Then you face off against other casters in a fight to win. With the cards or pages, you can attack and defend against your opponent. When you win, your opponent’s caster’s life points go from 1000 to 0. You must also make sure they don’t do the same thing to you. To do this, you cast spells that either makes it easier or harder for you to draw cards. Here are two things you can do to win the game: 1) Bring your opponent’s life points down from 1000 to 0; 2) Be the first player to do this by 500. When you play metal, every card has two sides.

Your opponent has one side, and you have the other. The backs of these cards are different from the fronts. Depending on the player’s position, the other side gives them access to different skills (attacking, defending, drawing more cards). In metazoa games, the goal is to be able to flip more and more cards into your column until it is full and starts to fill up all 10 spaces on the table. The game is over when one person moves all ten cards into their column.

How Much Does It Cost?

You can only see prices for Kickstarter’s first editions right now. Most of them are much more expensive than $2,000. When more first editions come out, they may grow even more. Check eBay to find out how much it costs now.

The only place to buy and sell MetaZoo cards is on the secondary market. We are waiting for the first wave of non-Kickstarter first edition items to come out. The Bazaar marketplace on MetaZoo had been open for a while. They turned it off, so not all buying and selling tips happen on eBay, secret forums, or Discord.

Where to Buy MetaZoo?

You can pre-order a MetaZoo game on the MetaZoo marketplace or buy it from a TCG store near you. You can use the app store locator on their website to find a store near you that sells the games. Just type in where you are, how far you want to look, and how far you want to look. You can also place an order online through Amazon Kindle or eBay. Don’t forget that this is only true for MetaZoo cards.

How Many MetaZoo Cards are There? 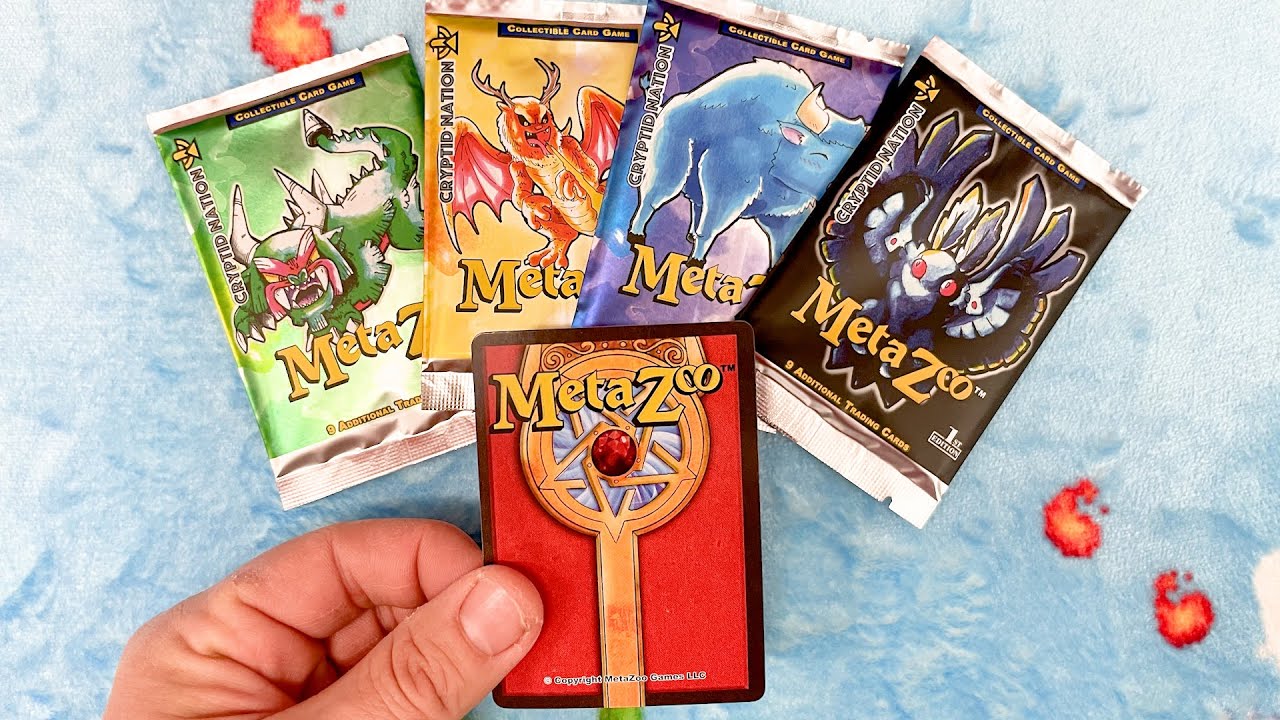 There were 100 copies of each of the 93 different sample cards in the “set.” With some simple math, we can figure out that this means that a total of 9,300 MetaZoo Cryptid Nation sample cards were ever made.

Why is MetaZoo so Expensive?

It turns out that each level of support comes with MetaZoo TCG promo cards, which is the real reason for a large amount of funding. In the higher tiers, there were special promo cards that were limited to 1000 or 250 copies, which could make them very valuable in a TCG.

Why is MetaZoo so Popular?

Metazoa game cards are very popular because the player can make their own deck. A deck has different kinds of cards. And will have at least 40 cards, but it could have as many as 60. Players put together their decks by buying cards from each other. You can also get it by cracking open booster packs (packs contain 12 random cards). Cards can be common, uncommon, rare, ultra-rare, or holographic, depending on how rare they are. They can also be made of gold or foil, which is a shiny version of a common or rare card (a shiny version of a rare or ultra-rare card). Players build decks that use different strategies and designs to beat their opponents.

Is MetaZoo a Good Investment?

Many buyers and sellers are betting on MetaZoo’s long-term success, and it looks like the company is committed to growing its product line and brand. But there are a few problems with this product that people who want to invest in MetaZoo products should know about.

MetaZoo is a very hard game to play both competitively and online because it uses a player’s physical environment. This is an important point.

As we’ve seen, every successful card game has added a digital platform that lets players connect and battle over the internet. But how will this be done in a game where the player’s surroundings are analyzed in real-time?

Also, the location of a tournament should have a big effect on how people play competitively. This should lead to mostly boring formats with many of the same cards and ways to play. How interesting will that be to people watching? Will advertisers help fund these tournaments to make sure that attendees and players have a great time?

What Distributors Does MetaZoo Use?

Here is a list of the distributors that MetaZoo Games works with all over the world.

Stores in the United States:

Stores in Europe or the UK:

MetaZoo is a collectible trading card game that came out in 2021. It was funded by a successful Kickstarter campaign. Since then, both gamers and collectors have become more interested in it. This article will try to make a list of the 20 MetaZoo cards that cost the most.

Even though I’ve talked about a lot of different things here, I hope you now know if MetaZoo is a good investment or not.

I think that the answer is a resounding YES for some goods and a resounding NO for others. If you do what I say, I’m sure you’ll make smart decisions about your MetaZoo collection and investments.

If you have any questions about this topic or ideas for future blogs, please let me know. I’d like to hear what you have to say.

How much did it raise?

MetaZoo’s Kickstarter for playing cards brought in $1 million in just one day.

When was MetaZoo released?

MetaZoo is a Kickstarter/TCG with a Cryptid theme. The monsters, spells, and artifacts in Cryptid Nation are the basis for a trading card game. The first set, which was funded through Kickstarter, is based on U.S. cryptids like Bigfoot, Mothman, and the Jersey Devil.

What is the next MetaZoo set?

MetaZoo: Cryptid Nation – UFO 1st Edition, a new booster set, will come out on July 29, 2022. It will be made by MetaZoo Games LLC.

How much did it make on Kickstarter?

MetaZoo is a trading card game (TCG) with cryptids as its theme. It has cards for Bigfoot, Mothman, Slide-Rock Bolter, Indrid Cold, and the Flatwoods Monster, among others. 255 backers gave a total of $18,249 to this project.

The trading card game Michael Waddell’s MetaZoo: Cryptid Nation is still in the funding stage. The first set of cards will feature “Beasties,” or mysterious creatures from the United States, like Bigfoot, Mothman, the Jersey Devil, the Flatwoods Monster, and Indrid Cold.

How many old scratches have been pulled from MetaZoo?

It’s not clear which MetaZoo items Old Scratch could use, but Booster Boxes are known to be one of them. MetaZoo Games sent out 100 Old Scratch cards all over the world. It is their second hidden rare card.

How long has it been out?

MetaZoo: Cryptid Nation is the first game made by MetaZoo Games. It came out today, July 30, after a Kickstarter campaign in the spring. The card game is based on both old and new myths. It has Pokémon-like characters like Bigfoot, the Jersey Devil, and the Mothman.